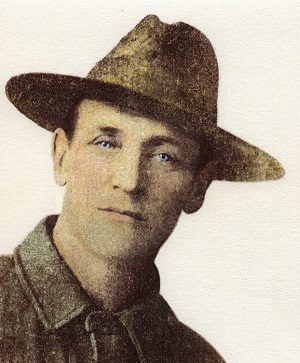 Thomas Henry “Crosscut” Wilson claimed to have been born in Kent, England, but actually hailed from Sydney, where he was born in 1865.

He is said to have been a friend of Henry Lawson and other writers associated with The Bulletin.  This magazine published some of Wilson’s early poetry in 1894/95.  He became known by his pen-name “Crosscut”.

T.H. Wilson came to Western Australia in 1895 looking for gold and soon afterwards was working in the Laverton district.  At this time many towns in the Goldfields had newspapers, and this included the Kalgoorlie Sun, which was regarded as the leading “literary” paper in Western Australia.

“Crosscut” was soon published in this newspaper as well.  He became a contributor of prose and poetry to The Sun for many years.

Wilson joined the AIF in 1915 and saw service on Gallipoli with the 16th Battalion. On the enlistment form he signed in August 1914, he gave his age as 39 years and six months, when in fact he was close to 50.

He was discharged from the army in 1916 (allegedly because he was “too old”) and returned to Australia in 1916.  He continued his writing, including about his time in the army until his death in 1925.

One of his poems about the Goldfields is below:

Weary hummers,
Beery bummers,
Cadging 'deeners', 'zacks' and 'thrummers',
Mooching in a flock,
Frontispieces hard and chilly,
Sparring pots off 'Dick' and 'Billy'
('Nough to drive a barman silly)
On the Boulder Block.

Drunks all fighting,
Crowd delighting,
Grimy derelicts exciting
Sympathy from mugs;
'Have-beens' viewing
Past with rueing
(Watching for a chance of chewing
Ears of tender 'lugs').

Miners drinking,
Crib-cans clinking -
Just off shift and no one shrinking
(Never mind the clock!).
Ragged shirt and gleaming collar,
Empty 'kick' and mighty dollar;
Health, and wealth, and grief, and squalor-
That's the Boulder Block.