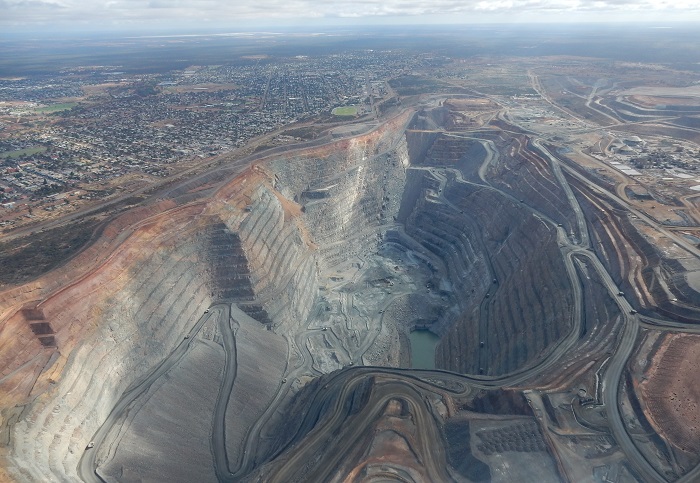 Patrick Hannan, Thomas Flanagan and Dan Shea may have discovered the gold that began the building of Kalgoorlie, but the riches that established a regional economy that still thrives today was found a few kilometres away just weeks later.

Will Brookman and Sam Pearce arrived at the new rush a few weeks after the June 1893 discovery at Hannan’s Find. Disappointed to learn that the ground there was pegged out, they decided to look at a range of small hills to the south.

The pair, who were acting on behalf of the South Australian Syndicate backed by Brookman’s brother George, discovered gold at what was to become the famous Ivanhoe lease. While Brookman was in Coolgardie registering the lease for the syndicate, Pearce discovered gold further to the east which they pegged and named the Great Boulder.

During the following months, Brookman and Pearce pegged, registered or acquired 17 leases for the syndicate, including the Great Boulder East, Lake View and Australia leases.

Prospectors rushed to the promising new site to peg the Kalgurli leases, Blue Gap, Perseverance, Star and Hainault. Other legendary leases of this early era include Chaffers, Golden Horseshoe, Oroya and Paringa.

The mining camp alongside “The Mile” rapidly grew into a township and was named Boulder, after the South Australian Syndicate’s Great Boulder lease.

The richness of this new field continued to be revealed. Canadian F.W.P. “Larry” Cammilleri, who registered his Brown Hill lease in October 1893, found gold occurring in a unique wide lode formation. Three years later, metallurgist Arthur Holroyd identified Telluride ore in these lodes, found in only a few places in the world.

The vast golden bonanza became known as the Golden Mile and it continues to yield its riches to this day.

By 1898 the Golden Mile had yielded half a million ounces of gold. Australia’s premier gold producer, it supplied 40 per cent of the national annual output.

In 1903 “The Mile” produced more than one million ounces of gold. Kalgoorlie and Boulder thrived and the Brookman syndicate was the biggest employer on the field.

By 1908, 100 headframes studded the Golden Mile and beneath the ground were more than 3,000km of workings.

But the boom was not to last. After 1903 mining fluctuated as grade decreased at deeper levels and smaller mines were bought out by the large companies.

Two world wars depleted the workforce, production declining during each conflict, although the revaluation of gold in 1932-33 sparked a short-lived boom.

By the mid-1970s most of the Golden Mile had ground to a halt, with only the Mt Charlotte mine, near Hannan’s original find, still in production. However by the end of the 1970s, with the floating of gold on the international market, the gold price had risen dramatically and “The Mile” was once again a good prospect.

In the 1980s, Western Australian entrepreneur Alan Bond obtained the finance to buy up the leases with the goal of amalgamating the entire Golden Mile to construct one huge open pit mine. Bond was unable to complete the takeover, but the deal went ahead and on 29 March 1989 Kalgoorlie Consolidated Gold Mines was formed to operate the Fimiston Open Pit, now widely known as the Super Pit

From its discovery in 1893 to the formation of Kalgoorlie Consolidates Gold Mines in March 1989, the Golden Mile produced 40,030,343 ounces of gold, and was Australia’s foremost producer of the precious metal.

Since its formation, KCGM has produced about 800,000 ounces of gold per year, about 8% of Australia’s gold output. The Super Pit is 3.5 kilometres long, 1.5 kilometres wide and more than 600 metres deep. With more than 1,000 employees, KCGM is Kalgoorlie-Boulder’s largest employer.

Many of the names of those rich, early leases – Paringa, Oroya, Brown Hill, Chaffers, Hainault – live on today as sections of the Super Pit which has surpassed them all with a gold reserve of 8.8 million ounces.