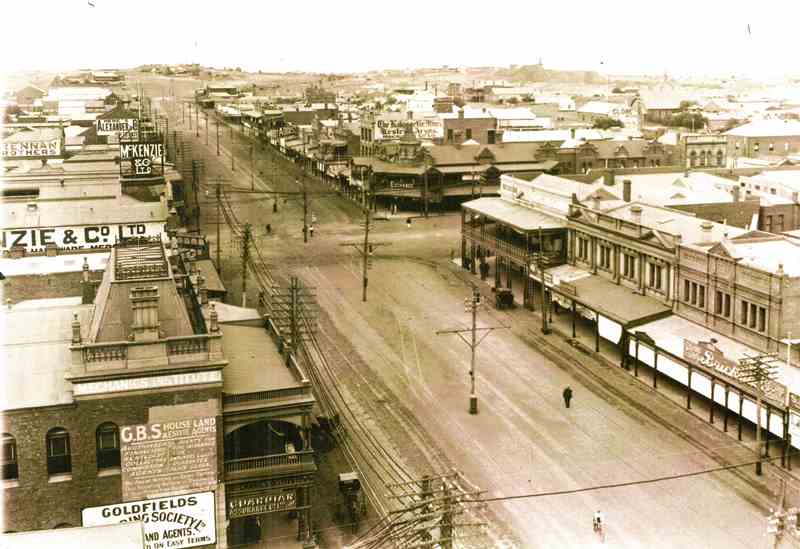 In June 1893, two Irish prospectors chasing rumours of a gold find at Mt Yuille pitched camp near a low hill about 40km north-east of Coolgardie.

Paddy Hannan and Thomas Flanagan were still 25km from their planned destination, but they liked the look of this new country and decided to do a bit of prospecting.

Among the groups passing through towards Mt Yuille (later known as Mt Youle), Hannan spotted Daniel Shea, another Irish prospector he knew, and invited him to join them.

Within a few days the trio found abundant alluvial deposits and within a week they had collected an estimated 100oz of gold. On 17 June, his saddlebags weighed down by nuggets, Hannan rode back to Coolgardie to apply for a reward claim. In his absence, Flanagan and Shea found another 100oz.

The news broke when Hannan reached Coolgardie and the Hannan’s Find rush was on. A week later, more than 1,400 men were working the new gold field.

Miners came in their hundreds and thousands, and the traders followed. Soon the rash of tents, shanties, canvas-walled pubs, tent brothels and timber framed shops grew into a sizeable settlement. Before Christmas 1893 more than 100 leases had been pegged.

Companies were formed to mine the quartz reefs and lodes that had shed the rich alluvial gold deposits that sustained the early prospectors. But it was the sensational gold deposits being uncovered a few kilometres south at Boulder that were to secure the region’s future.

Although still known locally as Hannan’s Find, the State Government chose the name Kalgoorlie and the town was gazetted on 4 September 1894. The word Kalgoorlie (sometimes spelled Kalgurli) is Aboriginal in origin. Various sources give the meaning as either the phrase for a dog chasing a kangaroo, the name of a local shrub (Galgurli) or the name of the edible silky pear (Kulgoolah).

Over the years, Kalgoorlie’s fortunes have followed the boom and bust cycle of the mining industry. Today gold mining remains the principal industry and the Super Pit, operated by Kalgoorlie Consolidated Gold Mines, is the principal local employer. Mining support industries and tourism are also important facets of the local economy.

The municipalities of Kalgoorlie and Boulder were amalgamated into the City of Kalgoorlie-Boulder on 27 January 1989, almost 96 years after Hannan, Flanagan and Shea made their historic find.

Paddy Hannan never made the list of the richest men in the Goldfields. He died in Melbourne on 4 November 1925, a relatively poor man. He has been immortalised in the name of Kalgoorlie’s main street, whose many beautiful buildings remain some of the gold rush era’s best examples of mining town architecture.