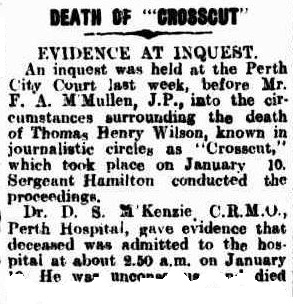 The report of the inquest into the death of Thomas Henry "Crosscut" Wilson, Western Argus, Kalgoorlie WA, Tuesday 3 February 1925

DEATH OF "CROSSCUT" - EVIDENCE AT INQUEST

An inquest was held at the Perth City Court last week, before Mr F.A. McMullen, JP, into the circumstances surrounding the death of Thomas Henry Wilson, known in journalistic circles as "Crosscut", which took place on January 10. Sergeant Hamilton conducted the proceedings.

Dr D.S. McKenzie CRMO, Perth Hospital, gave evidence that deceased was admitted to the hospital at about 2.50am on January 10, 1925. He was unconscious, and died at 10.20pm on the same day. As the result of a post-mortem examination, witness found that death was due to fracture of the skull. Deceased had been a patient at the hospital previously.

Constable R. White gave evidence that at about 2.30pm on January 10 he was in the act of leaving the Alhambra Bars by the steps leading to Royal Arcade. As he reached the top he happened to turn round, and saw a man fall to the ground at the bottom of the flight of steps opposite to the ones witness was standing on. The man's head struck the cement floor. Witness went back with another constable, and examined the man, who was unconscious and had a small cut in the back of the head. They had him removed to the hospital in an ambulance. There was no person within 10 ft. of the deceased at the time he fell.

Charles Lewis McBean, overseer at Mardathuna station, said he had known deceased for about six months. Deceased had been working for a well-sinker on the station. He once said to witness that he was suffering from heart trouble, the result of war service, and expressed the opinion that he might drop dead at any moment.

The Acting Coroner returned a verdict that deceased died at the Perth Hospital on January 10 from fracture of the skull, the result of a fall on the staircase of the Alhambra Bars, Perth.”