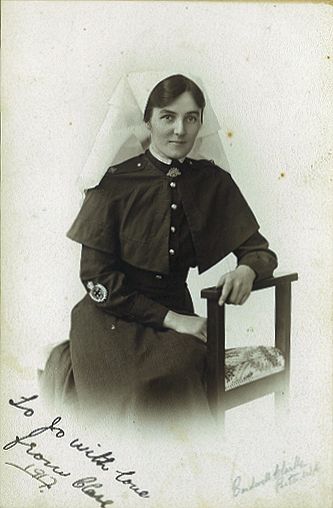 Clare Fitzpatrick was a Certified Nurse at the Kalgoorlie Government Hospital when she enlisted as Nursing Staff in the Australian Army Nursing Service (AANS) on 16 November 1917.

On 24 November 1917, 76 nurses including Clare, left Fremantle on the troopship Canberra. They were bound for Egypt with Colombo the first stop. It was then on to Cairo and the 14th General Hospital.

“Left Australia Nov. 24th at 10pm on my friend Dot’s birthday. It was a nice boat called the “Canberra”.”

Friday 21/11/1917 “We arrived at Cairo at 5.20pm. Matron and the Colonel of No 14 AGH were there to meet us and seemed very nice. We were driven in three Ambulance loads to Abbassia, about a three or four mile drive. It was quite dark when we arrived at the hospital.”

In February 1918 Clare and 80 other nurses and medicos with 600 patients were transferred from Abbassia to a large hospital out of Port Said.

Six months later she was moved to the Suez Government Hospital where she became quite ill after contracting Spanish Influenza.  Fully recovered in August 1918, Clare was sent to Cairo, then in January 1919 she was called on for transport duty to accompany wounded soldiers home to Australia.

Clare Fitzpatrick was officially discharged from the AIF on March 15, 1919.